Inverter generators are quieter than conventional generators, but why? even though they have the same fossil fuel engine to generate the power. The answer to that question is the difference in their design parameters as well as in their working mechanisms.

Keep reading to know the reasons for the noise from the generators in the first place and how the design and the working of inverter generators are advantageous to reduce the noise level of the generator.

Why Do Generators Produce Noise In The First Place?

The answer to that question is because it involves the rotating and moving mechanical parts, which are the main reason for the noise.

The main part of any generator is the engine. The engine runs by burning the fuel, which transfers the power to the pistons inside the engines, which will be responsible for a rotational motion inside the alternator, and the electricity is generated.

The burning of fuel inside the engine are small explosions that make the most of the noise. Companies take some measures to reduce it to some extent, but they can’t totally diminish it, and the matter gets worse when the generator is an open frame generator.

Besides the internal combustion engine, the friction between the moving parts also produces a significant amount of noise.

Why Are Inverter Generators So Quiet? 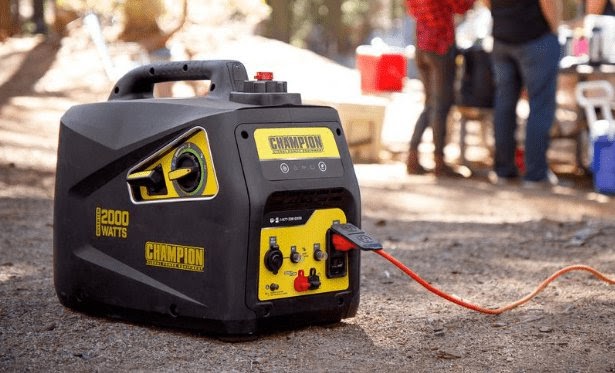 The first thing is the engine; the engine used in the inverter generators is smaller and a bit quieter than those used in conventional generators. Besides, they don’t need to run continuously to maintain the frequency of the output voltage.

The working of the inverter generator ensures the constant frequency. The engine runs the alternator to generate the AC electricity, which is converted to DC and then again AC. The whole process is controlled with the help of a microprocessor.

When the load is less, the microcontroller will reduce the speed of the engine, and so the noise is also reduced, while the frequency remains the same.

Other than that, the casing made out for the generator is from the noise absorbing and quality material.

Can Conventional Generators Be As Quiet As Inverter Generators?

No, you can’t make the conventional generators as quiet as the inverter generators. There are major differences in their working mechanisms, as we discussed.

Still, you can reduce the noise of the conventional generator to quite an extent with the use of some external means, but it will be more than the inverter generators.

Even if you enclose the whole generator in the casing, then you will need the air vents and the exhaust vents. And simply stating, exhaust pipes are the second most noisy part of the generator.

Inverter generators are the best option in the market in terms of noise level and portability. They run very smoothly and offer fuel economy. The engines designed for the inverter generators are inherently quieter than for the conventional generators. Moreover, they are equipped with other accessories to reduce the noise even more.

They are best for home use and for camping use as well. Their initial prices are high, but you get the power with the silence so you can enjoy nature.

READ HERE  TURBINE GOVERNING SYSTEM: WHAT IS IT AND HOW DOES IT WORK?

TURBINE GOVERNING SYSTEM: WHAT IS IT AND HOW DOES IT WORK?

Difference Between Generators And Alternators