We are now in East Africa, where many crocodiles live. The fine sand in this region is not supposed to contain any stones, but the stones are.

Scientists have discovered that someone brings them to this place, after studying those stones, it was found that they contain strange scratches and cracks. 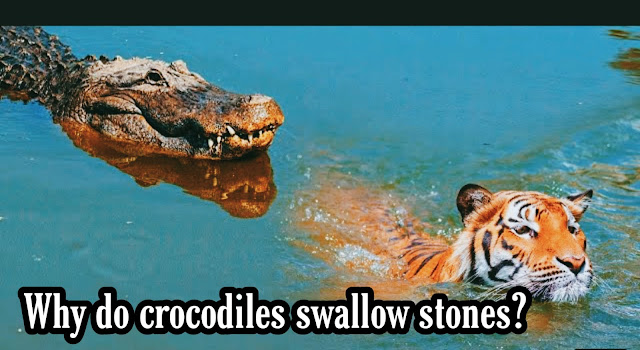 It later became clear that crocodiles swallowed these stones in the past and put them there. Researchers have assumed for a long time that crocodiles swallow stones by mistake, while devouring prey, some stones may enter the mouth and the crocodile is forced to swallow them, but there are other theories to explain this phenomenon and the most common.

The theory of crocodiles swallowing stones.

It is the theory that crocodiles swallow stones to protect themselves from predators. This strategy works well with small crocodiles that do not want to become a meal for predators.

Well crocodiles do not throw stones from their mouth for self-defense, but these stones help them to reach the bottom, we all know that the water pushes us upwards, and therefore diving requires a lot of effort, and this phenomenon occurs with animals also and the more the crocodile inhales a larger amount of air.

The more difficult it is to stay underwater, and in order to stay underwater, a crocodile will need to increase its weight a little, which it does by swallowing stones by the way. This trick works only with crocodiles, so there is no need to try it, and scientists believe that it increases the time that the crocodile can spend under water by eight Eighty percent.

The importance of crocodiles swallowing stones.

Scientists have done through experiments that crocodiles swallow stones throughout their lives. This is not a trick used by small crocodiles only, but even adult crocodiles do it as well. The huge crocodile does not swallow pebbles, but it swallows large stones directly, which will facilitate the process of drowning huge prey under water, as The crocodile helps to swim and resist water currents.

Also, small stones cannot remain in the stomach all the time because they can be excreted later with the excrement. Therefore, adult crocodiles prefer to swallow those stones that they cannot digest, swallowing two large stones is much better than swallowing ten small stones.

There is another theory that says that crocodiles swallow stones.

Because it is fossilized food, this theory is strange, but some scientists say that crocodiles do not eat fresh food only, but that they eat fossilized food.

It is also true that organic materials become petrified if they are placed in the appropriate conditions for this. Archaeologists do not only find fossilized animals, but they also find petrified fruits of peaches, apples, and others, and this may be the reason why crocodiles devour stones.

But what is wrong with this theory is that fossilization is very rare, as only zero separating one percent of the organisms that lived on our planet, were found fossilized, meaning that only one bone out of a billion bones can turn into stone, this means that we will get sixty bones Only out of three hundred and thirty million people currently live in the United States of America.

It is a third of the number of bones of only one human, which means that the chance of anything organic is not great that it will turn into stone in the future, but let’s prepare to talk about crocodiles if crocodiles swallow stones.

Crocodiles swallow stones to aid in the digestion process.

Here we are talking about those stones that are known scientifically, and they are stones that animals rely on to digest food inside their stomachs, and they can be used even after millions of years.

Do you remember the place we talked about at the beginning of the episode? Many crocodiles brought stones there earlier, then the scientists discovered them. Those stones were very soft and not to aid the digestion process. This makes us believe that the presence of soft and well polished stones in places where there is no water.

The reason is that those stones were in the stomach of an animal millions of years ago. When we say millions of years, we are talking about the dinosaur. The history of its appearance must have started a very long time ago, as scientists believe that some plant dinosaurs were not good at choosing climatic plants, so they devoured everything and in order to facilitate The digestion process was also devouring stones.

And this behavior led to the emergence of crocodiles, which were originally sharp stones used by animals to facilitate the digestion process, and therefore it can be said that what crocodiles do today, is an extension of the same behavior that was characterized by dinosaurs in the past. Some animals today are able to parts of their body, and those parts can grow again, but Dinosaurs were not able to do this as flying dinosaurs were more like birds that we see today.

But their wings are made of leathery membranes similar to those of bats.

Bats can fly easily, but dinosaurs were only flying short distances and with great difficulty, and when the dinosaurs became extinct, life developed on the surface of the earth and  new types of animals appeared, including crocodiles that swallowed stones like dinosaurs completely.

And they have other distinctive abilities, such as the fact that their tails are able to grow when a small part of them is cut off. All the animals that we see in our world today outperformed the dinosaurs, and if the dinosaurs were present now, they would be easy prey for the dwarfs, and the reason is related to intelligence. Dinosaurs will not be able to compete with any animal in the world. The wilderness was also not good at hunting.

The intelligence of dinosaurs.

There is a theory that natural disasters affect the intelligence of animals from one another and teach them how to deal with various circumstances. But if we look at the fact that humans are the smartest creatures on earth, who would have controlled the earth in the absence of humans?

The intelligence of parrots.

The researchers believe that parrots were able to do this as highly intelligent birds that are adaptable to climate and food shortages and can find solutions to problems.

It also has a strong memory.

In any case, we are here, so there is no need to think about this topic, and with this, dear viewers, we have reached the end of this episode.

READ HERE  What is a Resistor: Types, Uses, Details