Welcome to ELECTRICAL ENCYCLOPEDIA, in this article we will study about the Hot Wire Instruments , it construction , working , advantages and disadvantages.

These type of instruments are mainly used as Ammeter but can be used as Voltmeter by connecting a high resistance in series.

What is Hot Wire Instrument?

As shown in the figure , this type of instrument consists of a wire AB which is made up of platinum-iridium because it can withstand oxidation at higher temperature. Wire AB is stretched between a fixed end B and adjusting screw at A. When current is to be measured , it is then passed through the wire AB. 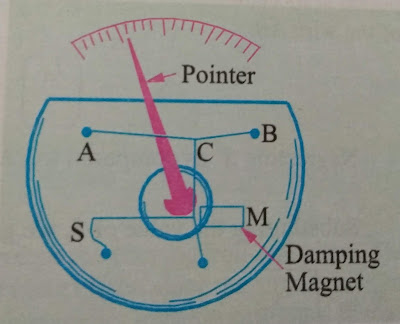 There is a another wire CD which is usually made up of phosphor-bronze. One end of wire CD is is attached to the center of AB while other end of CD is taken over the pulley by silk thread. This silk thread is pulled by the spring S.

Working principle of hot wire instrument is based upon the heating effect of Electric Current. When the current is passed through the wire AB , it expands. This produces the sag in wire AB , since the wire CD is attached to AB. So it will produce a slack in CD, this slack in CD is taken up by the silk thread which after passing through the pulley is attached to the spring. As soon as the silk thread is pulled by the spring, the pulley moves , therefore produces a deflection in the pointer which in turn gives the reading on calibrated scale.

Damping :  Generally eddy current damping is provided in hot wire instrument. A thin light aluminium disc is attached to the pulley such that it moves between the poles of permanent damping magnet ,M.

1. Such instruments can be used for both a.c and d.c.

2. There readings are independent of waveform and frequency.

3. They are not affected by the stray magnetic field.

1. They have high power consumption.

3. Hot wire instruments are sluggish (slow) in nature i.e. it takes time to heat up.