A dc drive operates in two modes – motoring and braking.

In motoring, it converts electrical energy to mechanical energy, which supports the motion.

In braking, it works as generator converting mechanical energy to electrical energy and thus opposes the motion.

DC drives can provide motoring and braking operations for both forward and reverse directions therefore it is called four quadrant operation of drives.

We know that power developed in a drive is equal to the product of angular speed and torque.

Speed is considered positive when motor rotates in forward direction. Torque is positive when it produces a positive rate of change of speed. 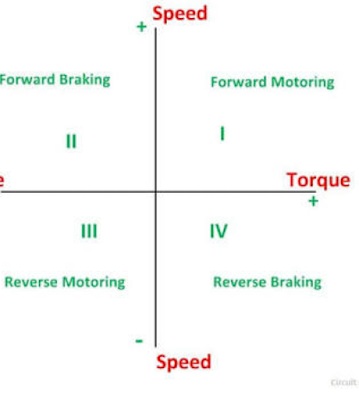 In quadrant 1, developed power is positive , hence the machine works as motor supplying mechanical energy. This is called forward motoring.

Operation in quadrant II represents breaking, because in this part the speed is positive and the torque is negative. The machine operates as a generator developing a negative torque which opposes the motion

In the fourth quadrant , the torque is positive and speed is negative. This quadrant corresponds to braking in reverse motoring.