What is a Control System?

A control system is defined as a system of devices that manages, commands, directs, or regulates the behavior of other devices or systems to achieve a desired result. A control system achieves this through control loops, which are a process designed to maintain a process variable at a desired set point.

In other words, the definition of a control system can be simplified as a system, which controls other systems. As human civilization is being modernized day by day the demand for automation has increased alongside it. Automation requires control over systems of interacting devices.

Open-loop control systems have two major characteristics: first, they use a set point input to define what the final value should be and second, there is no feedback in the control circuitry that allows the system to self-adjust. Open-loop control systems are basically a one-way street that tells its final value based on a setpoint input and that is it with no room for error or adjustment.

An Open-Loop Control System is something like the cruise control found in cars. Open Loop Control Systems are automatic systems that are not controlled by any other feedback or sensors but only work based on an input set point.

Open-loop control systems are found in many industrial applications, such as in heating, ventilation, and air conditioning (HVAC) systems and in chemical processing plants. Open-loop control systems are not found in many places within our lives because Open-Loop Systems lack the ability to self-adjust based on external factors. Open-Loop Control Systems are an older technology that has been replaced by Closed Loop Control Systems which have sensors in place to allow the system to self-adjust.

In most cases, the controllers in closed-loop control systems use PID (proportional integral derivative) controllers. PID controllers have been used for over 50 years and are still being used because of their reliability and performance. The three main parameters of a PID controller are the proportional (P), integral (I), and derivative (D) constants. These constants are usually determined by trial and error to achieve the desired control response.

The computer reads the actual temperature and compares with the desired temperature. If it finds any difference then it sends the signal to switch ON or OFF the relay through D/A converter and amplifier. Thus the system automatically corrects any changes in output. Hence it is a closed loop system.

Traffic control by means of traffic signals operated on a time basis constitutes an open loop control system. The sequence of control signals are based on a time slot given for each signal. The time slots are decided based on a traffic study. The system will not measure the density of the traffic before giving the signals. Since the time slot does not change according to traffic density, the system is open loop system.

Numerical control is a method of controlling the motion of machine components using of numbers. Here, the position of work head tool is controlled by the binary information contained in a disk. A magnetic disk is prepared in binary form representing the desired part P (P is the metal part to be machined). The tool will operate on the desired part P. To start the open loop system, the disk is fed through the reader to the D/A converter.

The D/A converter converts the FM(frequency modulated) output of the reader to a analogue signal. It is amplified and fed to a servomotor which positions the cutter on the desired part P. The position of the cutter head is controlled by the angular motion of the servomotor.

This is an open loop system example since no feedback path exists between the output and input. The system positions the tool for a given input command. Any deviation in the desired position is not checked and corrected automatically.

A magnetic disk is prepared in binary form representing the desired part P (P is the metal part to be machined). To start the closed loop system, the disk is loaded in the reader. The controller compares the frequency modulated input pulse signal with the feedback pulse signal. The controller is a computer or microprocessor system.

If there is any difference between these two, the controller sends a signal to the servomotor to reduce it. Thus the closed loop system automatically corrects any deviation in the desired output tool position. An advantage of numerical control is that complex parts can be produced with uniform tolerances at the maximum milling speed.

The position control system shown in the below is a closed loop system example. The system consists of a Servomotor powered by a generator. The load whose position has to be controlled is connected to motor shaft through gear wheels. Potentiometers are used to convert the mechanical motion to electrical signals. The desired load position (θR) is set on the input potentiometer and the actual load position (θc) is fed to feedback potentiometer. 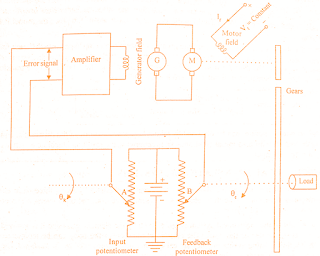 The difference between the two angular positions generates an error signal which is amplified and fed to generator field circuit. The induced emf of the generator drives the motor. The rotation of the motor stops when the error signal is zero, i.e. when the desired load position is reached.