What are AC Bridges?

Alternating current bridge methods are of outstanding importance for measurement of electrical quantities.Measurement of inductance, capacitance, storage factor, loss factor may be made conveniently and accurately by employing ac bridge networks.

The AC bridge is a natural outgrowth of the Wheatstone bridge.An ac bridge, in its basic form, consists of four arms, a source of excitation, and a balance detector.

In an ac bridge, each of the four arms is an impedance, and the battery and the galvanometer of the Wheatstone bridge are replaced respectively by an ac source and a detector sensitive to small alternating potential differences.

The usefulness of ac bridge circuits is not restricted to the measurement of unknown impedances and associated parameters like inductance, capacitance, storage factor, dissipation factor etc.

For measurements at low frequencies, the power line may act as the source of supply to the bridge circuits.For higher frequencies, electronic oscillators are universally used as bridge source supplies. These oscillators have the advantage that the frequency is constant, easily adjustable, and determinable with accuracy.

The waveform is very close to a sine wave, and their power output is sufficient for most bridge measurements.A typical oscillator has a frequency range of 40 Hz to 125 kHz with a power output of 7 W.

The detectors commonly used for ac bridges are :

Headphones are widely used as detectors at frequencies of 250 Hz and over upto 3 or 4 kHz. They are most sensitive detectors for this frequency range. When working at a single frequency a tuned detector normally gives the greatest sensitivity and discrimination against harmonics in the supply.

Tuneable amplifier detectors are the most versatile of the detectors. The transistor amplifier can be tuned electrically and thus can be made to respond to a narrow bandwidth at the bridge frequency. The output of the amplifier is fed to a pointer type of instrument. This detector can be used, over a frequency range of 10 Hz to 100 kHz.

For ordinary ac bridge measurements of inductance and capacitance, a fixed frequency oscillator of 1000 Hz and output of about 1 W is adequate. For more specialised work continuously variable oscillators are preferable with outputs up to 5 W. The high power may be necessary on some occasions, but in practice, it is better to limit the power supplied to the bridge.

Another practice which is usually followed is to use an untuned amplifier detector.The balance detection is sensed both orally by headphones, and visually by a pointer galvanometer having a logarithmic deflection (In order to avoid damage to the galvanometer which may be caused by unbalance).

The below figure shows a basic ac bridge.The four arms of the bridge are impedances Z1,Z2,Z3 & Z4. 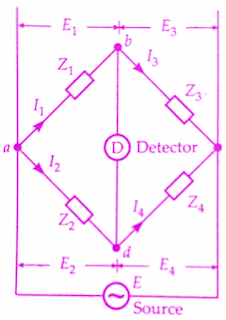 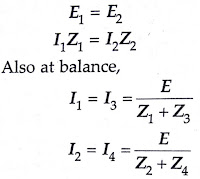 On Substitutions we get,

or when using admittances instead of impedances

Considering the polar form, the impedance can be written as Z = Z∠θ, where Z represents the magnitude and θ represent the phase angle of the complex impedance.Now that equation can be re-written in the form

Thus for balance, we must have,

The above equation shows that two conditions must be satisfied simultaneously when balancing an ac bridge.The first condition is that the magnitude of impedances satisfies the relationship :

The second condition is that the phase angles of impedances satisfy the relationship :

If we work in terms of rectangular coordinates, we have

Equating the real and imaginary parts separately, we have,

Thus if L1 and R1 are unknown, the above bridge may be used to measure these quantities in terms of R2, R3, R4 and L2.We may deduce several important conclusions from the above simple example.They are :

2.The two balance equations enable us to know two unknown quantities.The two quantities are usually a resistance and an inductance or a capacitance. 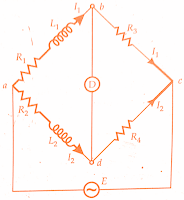 The process of alternate manipulation of two variable elements is rather typical of the general balancing procedures adopted in most ac bridges. When two variables are chosen such that the two balance equations are no longer independent, the ac bridge has a very poor convergence of balance and gives the effect of sliding balance.

The term Sliding Balance describes a condition of interaction between the two controls. Thus when we balance with R2, then go to R3 and back to R2 for adjustment, we find a new apparent balance.

Thus the balance point appears to move, or slide and settles only gradually to its final point after many adjustments.It may be emphasised here that in case the two balance conditions are independent, not more thane two or three adjustments of the variable elements would be necessary to obtain balance.

In case we choose the two variable components such that the two equations are not independent the balance procedure becomes laborious and time-consuming.

For example, if we choose R2 and R3 as variable elements, the two equations are no longer independent since R3 appears in both the equations. There are two adjustments, one resistive and the other reactive that must be made to secure balance.

For the usual magnitude responsive detector, these adjustments must be made alternately until they converge on the balance point. The convergence to balance point is best when both the variable elements are in the same arms.

4.In this bridge circuit, balance equations are independent of frequency. This is often a considerable advantage in an ac bridge, for the exact value of the source frequency, need not then be known.Also, if a bridge is balanced for a fundamental frequency it should also be balanced for any harmonic and the wave-form of the source need not be perfectly sinusoidal.

On the other hand, it must be realized that the effective inductance and resistance for example, of a coil, vary with frequency, so that a bridge balanced at a fundamental frequency is never, in practice, truly balanced for the harmonics.

To minimize difficulties due to this the source waveform should be good, and it is often an advantage to use a detector tuned to the fundamental frequency.Further, while the disappearance of the frequency factor is of advantage in many ac bridges, some bridges derive their usefulness from the presence of a frequency factor.

Such bridges must then be supplied from a source with very good wave-form and high frequency stability.Alternatively, they may be used to determine frequency.

READ HERE  Measurement of Self Inductance by Owen's Bridge

[PDF] Flood Scour for Bridges and Highways: Prevention and Control of...

What is difference between AC MCB and DC MCB?