Different types of poles or towers are used to support overhead lines structures which are known as line supports.

A line support should possess the following requirements.

(i) It should have the high mechanical strength to bear the conductor weight, wind load etc.

(ii) Maintenance should be easy and cost should be very low.

(iii) It Should be very light in weight and extremely durable.

(iv) Proper spacing between the conductors and ground clearance must be maintained.

The different line supports used by transmission lines include,

The choice of support depends upon the cost, span of line, atmospheric conditions and line voltage.

(a) Wooden poles-Type of Electrical Poles

When compared to different types of line supports wooden poles are cheap and are used for lines of shorter spans about 50 meters, best suited for rural areas.They can withstand voltage up to 132 kV When, single or  H type poles, are used whereas double pole structures of ’A or H type provide higher transverse strength and are usually used for terminal poles.

These supports are used because they are of low cost, available without difficulty, have a natural insulating property due to which lesser flashovers occur for lightning. To protect it hum decay a metallic cap is provided at the top.

The reasons which restrict the use of wooden poles are,

(i)Diameter and height of wooden poles.

(iii) The tendency not below ground level.

(iv) Strength and durability can‘t be predicted with certainty.

(v) Problems due to insects and birds and require.

These poles are widely used because of their longer durability and are used for system 33 kV. They have greater mechanical strength, used for longer spans, longer- life and maintaining cost is very low. They also have good insulating properties am appearance. RCC pole structure is shown in the figure. 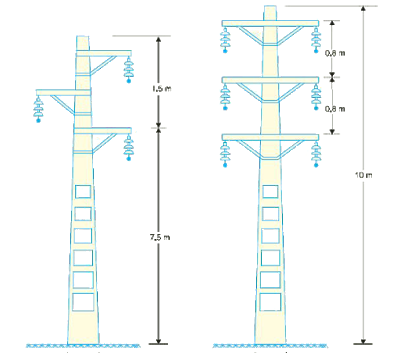 The drawbacks of using RCC poles is they are very heavy in weight and there are chances of damage during transportation, loading and unloading and transportation cost is high.These difficulties are overcome by. using prestressed concrete poles which are manufactured at job sites themselves and have very less weight as less material is used. Holes provided in the poles reduce their weight and make climbing the poles easier.

These poles are used for distribution purposes along roadsides and developed areas. These are favored for voltages up to 33 kV (low and medium voltages) when compared to Wooden and RCC poles, they have high mechanical strength, longer life of at least 30 years, possesses lightweight but are costlier.They need to be galvanized or painted periodically to prolong its life and prevent them from corrosion and hence maintenance cost is high. They are often used as the substitute for wooden poles.

Where long span of lines are very essential, steel towers are used for long-distance transmission at voltages above 33 kV, Owing to longer span, insulation cost and risk of interrupted service is reduced to a large extent. Lightning troubles and breakdowns are reduced considerably as the tower footing are grounded into the earth. These towers are made of‘ steel, have longer-life, high mechanical strength and ability to withstand severe climatic conditions. 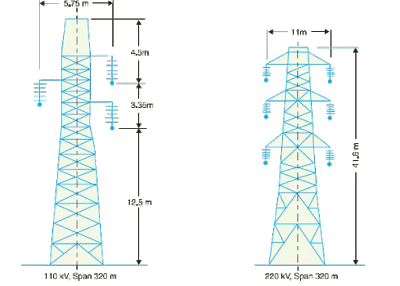 These are of two types,

These are classified into,

(a) Narrow base lattice type

Lattice type structures are one of the most common types of self—supporting towers. The narrow—base type employs lattice construction of channel or angle with welded or bolted connections. These are used for shorter spans. (In lattice a broad—base type only lattice construction with bolted connections are used. Each leg has a separate foundation. These are used when the span is very large. Figures show broad and narrow—base circuit towers.

Supporting towers are also dived as,

-Tangent towers which are employed for straight lines.

-Deviation towers are employed if the transmission line changes direction.

As the self-supporting structures are mostly used in India, guyed towers are preferred in USA and Canada: Where helicopters are used for transportation of these towers at the sites which are not accessible by road or rail. Less expensive, lighter, aluminum guyed towers are favored in areas facing transportation problems. The span between the towers is reduced, which increases reliability and reduces cost. These are of two types portal and V-type as shown in figures. 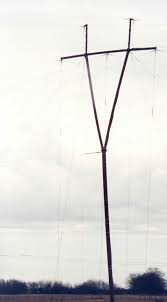 [PDF] A Handbook on Civil Engineering for Railway & Other Engineering...