We knew that in non-salient pole type alternators the air gap is uniform. Due to the uniform air gap, the field flux, as well as armature flux varies sinusoidally in the air gap.In nonsalient pole alternators, air gap length is constant and reactance is also constant.This two reaction theory was given by Professor Andre Blondel so it is named as Blondel two reaction theory.

Due to this, the MMFs of armature and field act upon the same magnetic circuit all the time hence can be added vectorially.But in salient pole type alternators, the length of the air gap varies and the reluctance also varies. Hence the armature flux and field flux cannot vary sinusoidally in the air gap. The reluctances of the magnetic circuits on which MMFs act are different in the case of salient pole alternators.

Key Point: According to this theory, the armature m.m.f. can be divided into two components as,

1. The component acting along the pole axis called direct axis.

2. The component acting at right angles to the pole axis called quadrature axis. 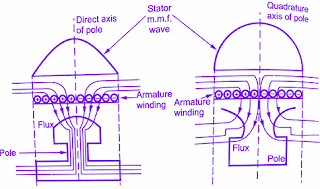 The air gap is least in the center of the poles and progressively increase, on moving away from the center.Due to such shape of the pole-shoes, the field winding wound on salient poles produces the MMF wave which is nearly sinusoidal and it always acts along the pole axis which is the direct axis.

Let Ff be the MMF wave produced by field winding, then it always acts along the direct axis. This MMF is responsible for producing an excitation EMF Ef which lags Ff by all angle 90°.

Fd = component along the direct axis

The positions of FAR, Fd and Fq in space are shown in the below figure. The instant chosen to show these positions is such that the current in phase R is maximum positive and is lagging Ef by angle Ψ.

The phasor diagram of MMF wave positions in salient pole machine is shown below. 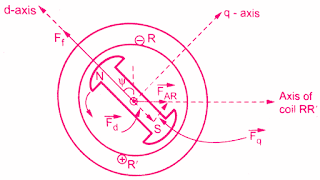 It can be observed from the figure that Fd is produced by Id which is at 90° to Ef while Fq is produced by Iq which is in phase with Ef.The flux components of ΦAR which are Φd and Φqrespectively are also shown in the below figure.

It can be noted that the reactance offered to flux along the direct axis is less than the reactance offered to flux along quadrature axis.Due to this, the flux ΦAR is no longer along FAR or Ia.Depending upon the reluctances offered along the direct and quadrature axis, the flux ΦARlags behind armature current Ia. 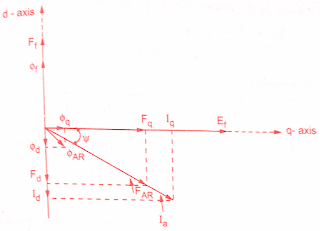 We already know that the armature reaction flux ΦAR has two components,  one is Φdalong the direct axis and Φq along quadrature axis. These fluxes are proportional to the respective MMF magnitudes and the permeance of the flux path oriented along the respective axes.Here below were are going to derive the terminal voltage in Blondel two reaction theory.

Permeance is the reciprocal of reluctance and indicates ease with which flux can travel along the path.

The MMF is always proportional to current.While Kar is the armature reaction coefficient.

Let Ed and Eq be the induced e.m.f.s due to the fluxes Φd and Φq respectively.

The resultant e.m.f. is the phasor sum of Ef, Ed, and Eq.

Substituting in expression for ER,

From the Blondel two reaction theory phasor diagram shown in the below figure, the angles Ψ and 𝛿 values are unknown, though Vt, Ia, and  Φ values are known.Hence the location of Ef is also unknown.The components of Ia, Id, and Iq cannot be determined which are required to sketch the phasor diagram.Let us find out some geometrical relationships between the various quantities which are involved in the phasor diagram. To understand this, Blondel two reaction theory phasor diagram is drawn as shown above.

The drop IaRa has two components.They are

IdRd = drop due to Ra in phase with Id

IqRa = drop due to Ra in phase with Iq

The IdXd and IqXq can be drawn leading Id and Iq by 90° respectively.The detailedBlondel two reaction theory phasor diagram for lagging power factor is shown below.

In the phasor diagram,

The triangle ABC is the right-angled triangle.

The point C can be located.Hence the direction of Ef is also known.Now triangle ODC is also right angle triangle,

As IaXq is known, the angle Ψ can be calculated from the above equation. As Φ is known we can write,

READ HERE  How to use Text Functions in Excel