The term synchro is a generic name for a family of inductive devices which works on the principle of a rotating transformer(Induction motor). The trade names for synchros are Selsyn, Autosyn and Telesyn. Basically, they are electro-mechanical devices or electromagnetic transducers which produces an output voltage depending upon the angular position of the rotor. Here we will learn the transfer function of Synchros.

A synchro system is formed by the interconnection of the devices called the synchro transmitter and the synchro control transformer. They are also called Synchro pair. The synchro pair measures and compares two angular displacements and its output voltage are approximately linear with an angular difference of the axis of both the shafts. They can be used in the following two ways,

1. To control the angular position of the load from a remote place/long distance.

2.For automatic correction of changes due to the disturbance in the angular position of the load.

What is synchro transmitter?

A Synchro Transmitter Receiver Trainer is an electromagnetic transducer commonly used to convert an angular position of a shaft into an electric signal. It is usually called a synchro transmitter. Its construction is similar to that of a three phase alternator.

It is made of laminated silicon steel and slotted on the inner periphery to accommodate a balanced three-phase winding. The stator winding is the concentric type with the axis of three coils 120° apart. The stator winding is star connected ( Y-connection). This basic construction will help you derive the transfer function of Synchros.

The rotor is of dumbbell construction with a single winding. The ends of rotor winding are terminated on two slip rings. A single-phase ac excitation voltage is applied to the rotor through slip rings.

When the rotor is excited by ac voltage, the rotor current flows, and a magnetic field is produced. The rotor magnetic field induces an emf in the stator coils by transformer action. The effective voltage induced in any stator coil depends upon the angular position of the coil’s axis with respect to the rotor axis. θ = Angular displacement of rotor with respect to reference.

Let the rotor rotates in an anticlockwise direction. When the rotor rotates by an angle,θ EMFs are induced in stator coils. The frequency of induced emf is the same as that of rotor frequency. The magnitude of induced EMFs is proportional to the turns ratio and coupling coefficient. The turns ratio, Kt is a constant, but coupling coefficient, K is a function of rotor angular position.

Hence the EMFs of stator coils with respect to neutral can be expressed as follows.

With reference to the below figure by Kirchoffs voltage law the coil-to-coil emf can be expressed as , 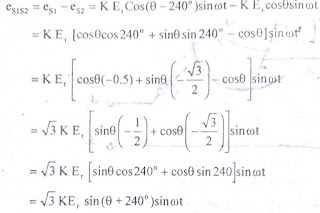 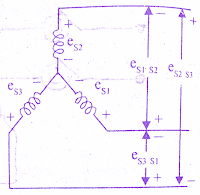 When θ = 0, from equation the above equation we can say that maximum emf is induced in coil S2.But from equation above ,it is observed that the coil-to-coil voltage es3s1 is zero.This position of the rotor is defined as the electrical zero of the transmitter.

It is possible to identify the angular position of the rotor [A device called synchro/digital converter is available to measure the stator voltages and to calculate the angular measure and then display the direction and angle of rotation of the rotor].

How To Find Y Parameters of Two Port Network (Examples)