The speed control system is an electro-mechanical control system.The electrical system consists of armature and field circuit but for analysis purpose, only field circuit is considered because the armature is excited by a constant voltage.The mechanical system consists of the rotating part of the motor and the load connected to the shaft of the motor.The field controlled DC motor speed control system is shown in the below figure.For this field controlled DC motor we shall find transfer function.

J = Moment of inertia of rotor and load

B = Frictional coefficient of rotor and load

The equivalent circuit of field is shown in the below figure. 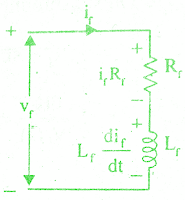 By Kirchoff ‘s voltage law, we can write

The mechanical system of the motor is shown in the below figure.

The differential equation governing the mechanical system of the motor is given by,

The Laplace transform of various time domain signals involved in this system are shown below.

On taking Laplace transform of the above equations with zero initial condition we get,

The equation (1) can be written as

On substituting to If(s) from equation (4) in equation (5) we get,transfer function of field controlled dc motor.

The 28 Critical SAT Math Formulas You MUST Know