Let us derive the formula for transfer function of thermal system and mathematical model of thermal System:

Note :  θ4 is called effective temperature difference of the emitter and receiver.

The thermal resistance, R for heat transfer between two substances is defined as the ratio of change in temperature and change in heat flow rate.

For conduction or convection,

On differentiating we get,

Thermal Capacitance, C is defined as the ratio of change in heat stored and change in temperature.

Consider a simple thermal system shown in the below figure.Let us assume that the tank is insulated to eliminate heat loss to the surrounding air, there is no heat storage in the insulation and liquid in the tank is kept at uniform temperature by perfect mixing with the help of a stirrer.Thus, a single temperature is used to describe the temperature of the liquid in the tank and of the out flowing liquid.The transfer function of thermal system can be derived as shown below. 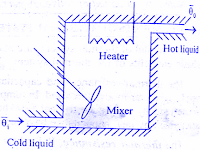 For this system the equation for q0, C and R are obtained as follows,

On substituting for qo from equation (1) in equation (3) we get,

In this thermal system,rate of change of temperature is directly proportional to change in heat input rate. 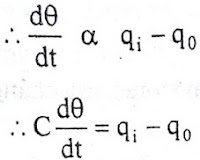 The constant of proportionality is capacitance C of the system.

On substituting for q0 from equation (6) in equation (5) we get,

On taking Laplace transform of equation (7)

θ(s)/Q1(s)  is the required transfer function of thermal system.

[PDF] Fundamentals of Metal Machining and Machine Tools By Winston A....