The three phase induction motors are the most widely used electric motors in the industry.They run at essentially constant speed from no-load to full-load.However, the speed is frequency dependent and consequently, these motors are not easily adapted to speed control.We usually prefer dc motors when large speed variations are required. 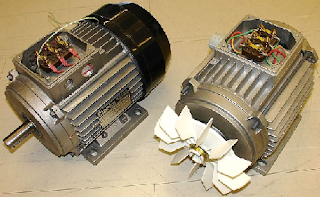 The induction motor may be considered to be a transformer with a rotating secondary and it can, therefore, be described as a “transformer type” ac machine in which electrical energy is converted into mechanical energy.

It consists of a steel frame which encloses a hollow, cylindrical core made up of thin laminations of silicon steel to reduce hysteresis and eddy current losses. A number of evenly spaced slots are provided on the inner periphery of the laminations.The insulated connected to form a balanced 3-phase star or delta connected the circuit.

The 3-phase stator winding is wound for a definite number of poles as per requirement of speed.Greater the number of poles, lesser is the speed of the motor and vice-versa.When 3-phase supply is given to the stator winding, a rotating magnetic field of constant magnitude is produced.This rotating field induces currents in the rotor by electromagnetic induction.

The rotor, mounted on a shaft, is a hollow laminated core having slots on its outer periphery.The winding placed in these slots (called rotor winding) may be  one of the following two types:

It consists of a laminated cylindrical core having parallel slots on its outer periphery.One copper or aluminum bar is placed in each slot.All these bars are joined at each end by metal rings called end rings.

This forms a permanently short circuited winding which is indestructible. The entire construction (bars and end rings) resembles a squirrel cage and hence the name.The rotor is not connected electrically to the supply but has current induced in it by transformer action from the stator.

However, it suffers from the disadvantage of a low starting torque.It is because the rotor bars are permanently short-circuited and it is not possible to add any external resistance to the rotor circuit to have a large starting torque.

It consists of a laminated cylindrical core and carries a 3-phase winding, similar to the one on the stator. The rotor winding is uniformly distributed in the slots and is usually star-connected.The open ends of the rotor winding are brought out and joined to three insulated slip rings mounted on the rotor shaft with one brush resting on each slip ring.

The three brushes are connected to a 3-phase star-connected rheostat as shown in Fig. At starting, the external resistances are included in the rotor circuit to give a large starting torque.These resistances are gradually reduced to zero as the motor runs up to speed. 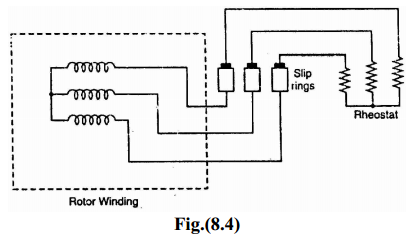 The external resistances are used during starting period only. When the motor attains normal speed, the three brushes are short-circuited so that the wound rotor runs like a squirrel cage rotor.

The speed of the rotating magnetic field is the same as the speed of the alternator that is supplying power to the motor if the two have the same number of poles.Hence the magnetic flux is said to rotate at synchronous speed.

(i) It has simple and rugged construction.

(ii) It is relatively cheap.
(iii) It requires little maintenance.
(iv) It has high efficiency and reasonably good power factor.

(v) It has self starting torque.

(ii) Its starting torque is inferior to dc shunt motor.

[PDF] Discrete Mathematics an Introduction to Proofs and Combinatorics by Kevin...