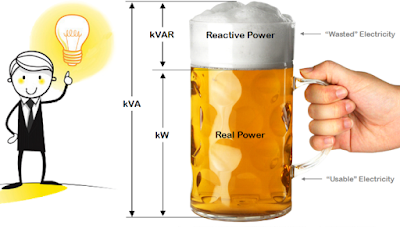 What Is Electrical Power Factor? 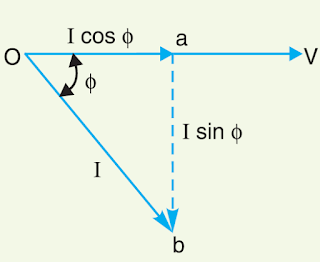 Consider an inductive circuit taking a lagging current I from supply voltage V; the angle of lag being φ. The phasor diagram of the circuit is shown in fig. The circuit current I can be resolved into two perpendicular components, namely ;

(i) It is a usual practice to attach the word ‘lagging’ or ‘leading’ with the numerical value of power factor to signify whether the current lags or leads the voltage. Thus if the circuit has a p.f. of 0·5 and the current lags the voltage, we generally write p.f. as 0·5 lagging.

The analysis of power factor can also be made in terms of power drawn by the a.c. circuit. If each side of the current triangle oab of below figure is multiplied by voltage V, then we get the power triangle OAB shown in the figure where

OB = VI and represents the apparent power in VA or kVA

The following points may be noted form the power triangle : 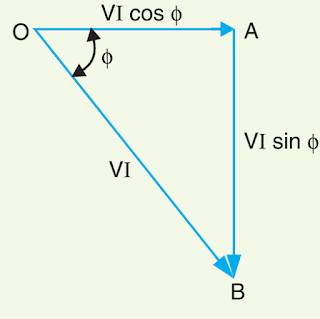 (i) The apparent power in an a.c. the circuit has two components viz., active and reactive power at right angles to each other.

Thus the power factor of a circuit may also be defined as the ratio of active power to the apparent power. This is a perfectly general definition and can be applied to all cases, whatever be the waveform.

(v) The power factor of a circuit can be defined in one of the following three ways :

The power factor plays an important role in a.c. circuits, since power consumed, depends upon this

(ii) Greater conductor size. To transmit or distribute a fixed amount of power at constant voltage, the conductor will have to carry more current at low power factor. This necessitates large conductor size.

(iii) Large copper losses. The large current at low power factor causes more I²R losses in all the elements of the supply system. This results in poor efficiency.

(v) Reduced handling capacity of the system. The lagging power factor reduces the handling capacity of all the elements of the system. It is because the reactive component of current prevents the full utilization of installed capacity. The above discussion leads to the conclusion that low power factor is an objectionable feature in the supply system.

Low power factor is undesirable from the economic point of view. Normally, the power factor of the whole load on the supply system in lower than 0·8. The following are the causes of low power factor:

(i) Most of the a.c. motors are of induction type (1φ and 3φ induction motors) which have low lagging power factor. These motors work at a power factor which is extremely small on light load (0·2 to 0·3) and rises to 0·8 or 0·9 at full load.

(iii) The load on the power system is varying; being high during morning and evening and low at other times. During low load period, the supply voltage is increased which increases the magnetization current. This results in the decreased power factor.

The low power factor is mainly due to the fact that most of the power loads are inductive and, therefore, take lagging currents. In order to improve the power factor, some device taking leading power should be connected in parallel with the load. One of such devices can be a capacitor. The capacitor draws a leading current and partly or completely neutralists the lagging reactive component of load current. This raises the power factor of the load.