A band stop filter is a type of frequency selective circuit that has an exact opposite functionality to the bandpass filter. As the name itself indicates that it will stop or attenuate a particular band or range of frequencies. Since it eliminates frequencies so it is also known as Band reject filter or band elimination filter. Also, that attenuated frequency band is known as a stopband of the filter.

Band stop filter is formed by combining the low pass and high pass filters in parallel connection through an amplifier circuit. The block diagram of the Band-stop filter is shown below:

Whereas the circuit diagram of an active Bandstop filter is shown as:

Notch filter by design has a very narrow stopband around their center frequency. The width of the notch is being calculated by its selectivity Q in exactly the same way as the resonance frequency peak is calculated in the RLC circuit.

The ideal response of any notch filter would be a completely flat response over the usable range with the exception of notch frequency as shown in the figure below. 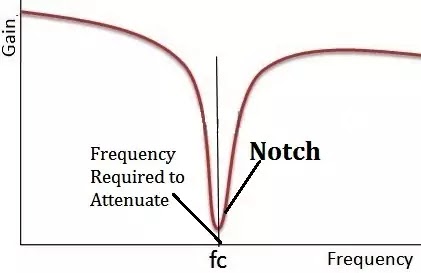 Practically perfection is very tuff to achieve. But by using the operational amplifier circuit, a high level of attenuation and narrow notch can be achieved.

The most common Notch filter design is the twin-T notch filter network. In its basic form, the twin-T is also called a parallel-T configuration. It consists of two RC branches in the form of two tee sections connected in parallel.

The basic twin-T Notch filter circuit is shown in the figure below as:

The frequency at which this basic twin-T notch filter design offers maximum attenuation is called Notch frequency. So notch frequency is formulated as: 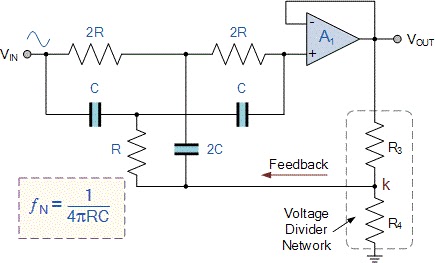 For designing a two Op-Amp narrow band RC notch filter with center notch frequency of 1kHz and 3-dB bandwidth of 100 Hz. Consider the 0.1uF capacitor and calculate all the values of the required components as explained in the below steps.

Step 1: Calculate the value of R for the given capacitance of 0.1uF.

Step 2: Calculate the value of Q.

Step 5: Finally Calculate the value of notch depth in dB as:

Hence after using these values in the circuit we can design the Notch filter as:

READ HERE  Measurement of Self Inductance by Owen's Bridge