Sometimes you’ll be given a point or a graph with clearly-plotted points, and told to translate the point(s) according to some rule. In other words, they won’t be giving you a function, per se, to move (so you won’t be able to use your graphing calculator to check your work); instead, you’ll be given points to move, and you’ll have to know how to flip them around the axis system yourself.

This transformation formula has just about everything: there’s a left-shift of one (the “+1” inside the argument of the function), a move-down by three (the “–3” outside the function), and a flip-upside-down (the “minus” sign multiplied onto the function directly). And, worse yet, I have no formula for f (x), so I can’t cheat; I have to do the transformation myself, point by point.

The way the original graph is drawn, there are four clearly-plotted points that I can use to keep track of things.

(In situations like this, they must give you clearly-plotted points, either labeled with coordinates or else obviously an integer x– and y-values. Otherwise, there’s no reasonable way for you to locate any points. So if in an exercise like this, a point looks like it has nice neat coordinate values, you can safely assume, in this context, that it does indeed have those nice values.)

If I move the plotted points successfully, then I can fill in the rest of the graph once I’m done.

Note: What I’m going to show you below is not what you would hand in. You would not show all this work in your homework, and certainly not on a test. But this displays the thinking that should be going through your head as you transform each point. If you’re not sure of yourself, this might be what your scratch-paper would look like.

I’ll work on the points in order, moving from left to right. 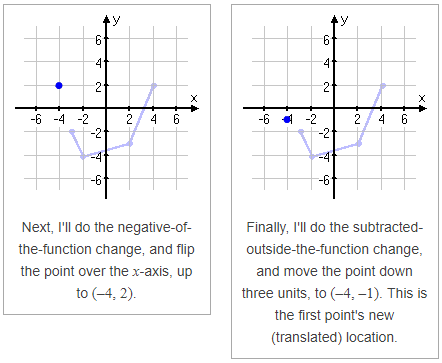 That’s the first point. Now I’ll work on the second point from the left. 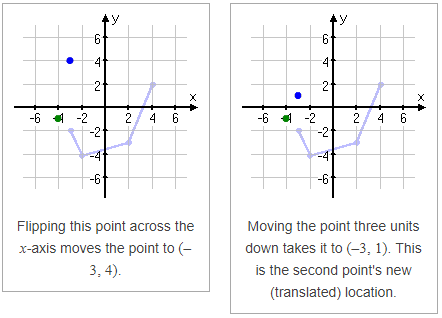 On now to the third of the original points. (The second point is shown in the graph below in green, to highlight its new location.)

Three points down; one to go.

If you’re not sure of the order in which to do the transformation’s steps, then stick to working from the inside out (from inside the argument, to anything that’s multiplied onto the function, to anything done outside the function), like I did above. Figure out the exact sequence of steps that each point will need to make. Then pick a point to move, and trace out the sequence of steps with your pencil tip, drawing in the translated point once you reach its final location. Then, once you’ve moved all of the points, you can draw in the transformation.

If your book or instructor uses this other way of expressing transformations, or if you get an exercise that’s formatted this way, don’t panic. Just work things out logically and step-by-step — and, if you prefer, multiple things back out to get a transformation expression more like what we’d started this page with.