In this article we will study about MAGNETIC HYSTERESIS. Magnetic hysteresis can be defined as lagging of flux density (B)  behind magnetizing intensity (H). Alternatively, it may be defined as the quality of magnetic substance, due to which energy is dissipated in it ,on the reversal of magnetic field / magnetism.

For understanding the hysteresis completely, let us take an non-magnetized iron bar ‘AB’ and magnetize this bar by placing a coil/solenoid over the bar. The field produced by solenoid is called magnetizing force (H).

Given below, this figure shows the circuit arrangement for finding the hysteresis curve of the material. The value of H can be increased or decreased by changing the circuit through the coil. Let the H be increased in steps from zero to certain maximum value and corresponding flux density (B) is noted. 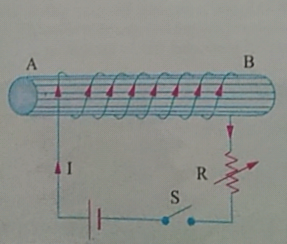 If we plot a graph between H and B produced in the iron bar, a curve like OA, as shown in figure is obtained.

1) The material becomes magnetically saturated when H is equal to OM as shown in figure below.
Flux density is maximum at this instant. 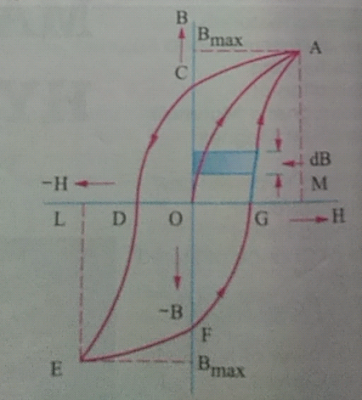 2) If H is now decreased gradually ( by decreasing solenoid current ), the flux density will not decrease along OA, as expected.

3) When H is zero, B is not zero but have a definite value = OC.
It means that on removing the magnetizing force H, the iron bar is not completely demagnetized. When H is zero, the B has some value. This is called residual flux density. This value measures the retentivity of the magnetic material.

4) Since the iron bar is not demagnetized on making H equal to zero. So, to demagnetize the iron bar, we have to apply the magnetizing force in reverse direction which can be done by reversing the direction of current.
When H is reversed, then at some value of H, flux density B becomes zero. This value of H is called coercivity of the material

5) When the magnetization is reduced to zero, the value of H is further increased in reverse direction. The iron bar again reaches a state of magnetic saturation as shown in figure by L.

By taking H back from its value corresponding to negative saturation (OL), a curve EFGA is obtained.

It is seen that B always lag behind H.

Area of the hysteresis loop represents the energy loss in one cycle of magnetization.

The energy loss due to hysteresis dissipates in the form of heat and hence raising temperature of that magnetic portion.

Finding the hysteresis loop of material is very important. Hysteresis curve helps in finding the magnetic property of material by observing it’s shape. 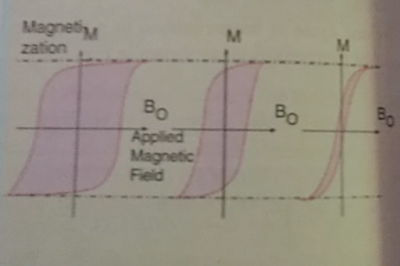 Loop 2 is for materials like wrought iron and cast steel. Such materials are suitable for making cores of electromagnet as they have high permeability and fair coercivity.

Loop 3 is for alloyed steel and it shows high permeability and low hysteresis losses. Hence such materials are most suited for rapid reversals of magnetization like armature and transformer cores.