Losses In A Rotating DC Machine

The above tree categorizes various types of losses that occur in a dc generator or a dc motor. Each of these is explained in details below.

As the armature core is made of iron and it rotates in a magnetic field, a small current gets induced in the core itself too. Due to this current, eddy current loss and hysteresis loss occur in the armature iron core. Iron losses are also called as Core losses or magnetic losses.

READ HERE  Working Principle of DC Motor
f=P.N/120
where,
P = no. of poles and
N = Speed in rpm
The loss depends upon the volume and grade of the iron, frequency of magnetic reversals and value of flux density. Hysteresis loss is given by, Steinmetz formula:
Wh=ηBmax1.6fV (watts)
where,
η = Steinmetz hysteresis constant
V = volume of the core in m3Eddy current loss: When the armature core rotates in the magnetic field, an emf is also induced in the core (just like it induces in armature conductors), according to the Faraday’s law of electromagnetic induction. Though this induced emf is small, it causes a large current to flow in the body due to the low resistance of the core. This current is known as eddy current. The power loss due to this current is known as eddy current loss.

Mechanical losses consist of the losses due to friction in bearings and commutator. Air friction loss of rotating armature also contributes to these.
These losses are about 10 to 20% of full load losses.

In addition to the losses stated above, there may be small losses present which are called as stray losses or miscellaneous losses. These losses are difficult to account. They are usually due to inaccuracies in the designing and modeling of the machine. Most of the times, stray losses are assumed to be 1% of the full load.

The most convenient method to understand these losses in a dc generator or a dc motor is using the power flow diagram. The diagram visualizes the amount of power that has been lost in various types of losses and the amount of power which has been actually converted into the output. Following are the typical power flow diagrams for a dc generator and a dc motor. 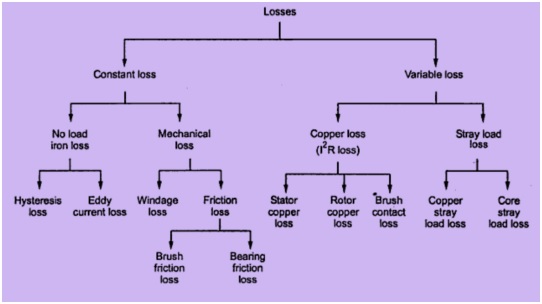