Theoretically, the same DC machine can be used as a motor or generator. Therefore, construction of a DC motor is same as that of a DC generator.

Working Principle Of A DC Motor

An electric motor is an electrical machine which converts electrical energy into mechanical energy. The basic working principle of a DC motor is: “whenever a current carrying conductor is placed in a magnetic field, it experiences a mechanical force”. The direction of this force is given by Fleming’s left-hand rule and its magnitude is given by

L = length of the conductor within the magnetic field.

Above animation helps in understanding the working principle of a DC motor. When armature windings are connected to a DC supply, an electric current sets up in the winding. Magnetic field may be provided by field winding (electromagnetism) or by using permanent magnets. In this case, current carrying armature conductors experience a force due to the magnetic field, according to the principle stated above.

Commutator is made segmented to achieve unidirectional torque. Otherwise, the direction of force would have reversed every time when the direction of movement of conductor is reversed in the magnetic field. This is how a DC motor works!

According to fundamental laws of nature, no energy conversion is possible until there is something to oppose the conversion. In case of generators this opposition is provided by magnetic drag, but in case of dc motors there is back emf. 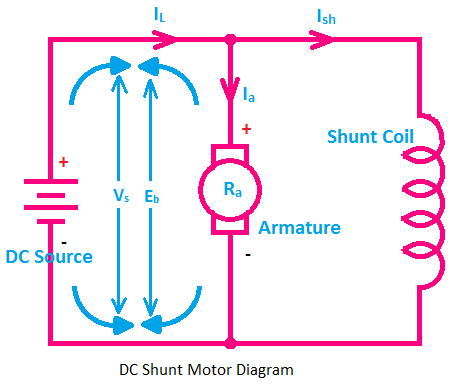 Significance Of Back Emf:

DC motors are usually classified on the basis of their excitation configuration, as follows –

See the chart of classification of DC machines here.

TNUSRB Result And Cutoff Mark 2021 to be Released. Check TNUSRB...