When we talk about Electrical Power then it is considered as Active power consumed by the circuit element. So the unit of Electrical power (Active power) becomes Watt or joule per second.

Watt is the SI unit of the power which is defined as the rate of conversion of 1-joule electrical energy per unit second.

Hence the Power consumed in an electrical circuit is said to be 1 watt if one ampere current flows through the circuit when a potential difference of one volt maintains across it.

Watt is a smaller unit of power. Whereas a larger unit of Electrical power is kW, MW, GW, etc.

Power consumed in the DC circuit is known as DC power. It is produced by a fuel cell, batteries, DC generators, etc.

Mathematically DC power is defined as the product of voltage and current through the circuit.

The power which is actually consumed or utilized in AC circuit is known as Active Power. It is the True power transmitted to the load for energy conversion. That’s why it is also known as True power or Real power in AC circuit. It is represented by an english alphabet ‘P’ and measured in Watt (W), kilowatt (kW), or Megawatt ( MW).

The power associated with reactive components (Inductors and Capacitors) of the circuit is known as Reactive Power. It flows in both (i,e back and forth) directions of the circuit.

Reactive power is not a useful power for consumers so it is interpreted as wattless power. It represents an extra burden on the electricity supply system and on the consumer’s bill also. Whereas this is required in the circuit to produce the electric and magnetic field for working of capacitors and inductors in the circuit. It has a direct impact on the power factor of the circuit. It only exists in electrical system when voltage and current in an AC circuits are not in phase.

A pure inductor and a pure capacitor do not consume any power in the circuit. Because in a half cycle whatever power is received from the source by these reactive components, the same power is returned to the source in the next half-cycle. Then the power which returns and flows in both the direction in the circuit is known as Reactive power.

This reactive power does not perform any useful work in the circuit. It is denoted by an English alphabet Q and measured in VAR,  kVAR, or MVAR.

In the case of the DC circuits, there are no concepts of Reactive Power. Whereas for the AC circuit it is calculated as

The combination of Active Power and Reactive Power is known as Apparent Power. It is the total power of the circuit.

Mathematically Apparent power is defined as the product of root mean square (RMS) value of voltage and current irrespective of its phase angle. It is denoted by an English alphabet ‘S’ and It is measured in kVA, MVA.

In the case of the DC circuit, it is the total power of the circuit. Whereas for the AC circuit it is calculated as :

The relation between Active, Reactive, and Apparent power can be expressed by representing quantities as a vector in geometrical form is known as Power Triangle. In this phasor diagram, voltage is considered as a reference phasor. It is a very useful triangle for finding the power factor of electrical circuits. 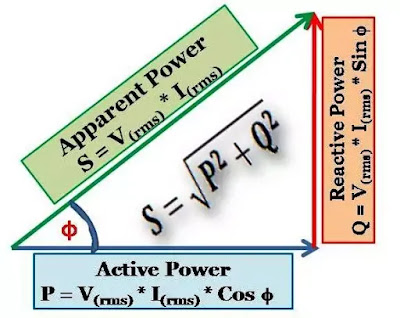