Well, what is Electrical Energy? How does it work? To better understand all these concepts of Electrical energy, let us discuss some basics about Energy.

Energy is nothing but the ability to do any work. Where work is done when a force moves an object from one position to another. We use energy every day, which is available in all different forms. Electrical energy is also one of the forms of energy that’s stored in the electric field by a charged particle.

Electrical Energy is defined as the form of energy which is caused by the movement of the electrons from one point to another, then such type of energy is called electrical energy.

In other words, electrical energy is nothing but the work done by the moving electrons or charges in the electric field.

As we explained above Energy is the ability to do work or apply a force to move an object from one position to another. So in the case of electrical energy, that force is electrical attraction or repulsion force between the charged particles.

How does Electrical Energy work

To better understand the concepts of Electrical Energy, it is essential to know How does Electrical Energy work? Basically, electrons and protons are very crucial to make the electricity to work.

So the basic working principle is that electrons in copper wire are free to move. Each electron carries a negative charge. So It’s movement is due to attractive forces between the electron and positive electrical charges (such as protons and positively-charged ions) and repulsive forces between the electron and negative charges (such as other electrons and negatively-charged ions). 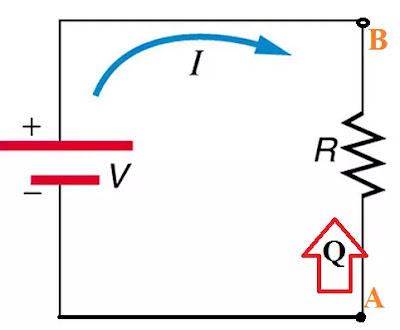 To develop Electrical Energy formula, let us consider a simple circuit which contains an energy source (battery), a Resistance and a conducting wire to complete the path for current.

Let us assume the potential difference between point A  and Point B is V volts. If a charge Q coulomb travels from point A to B in time t sec. then, Current I amp is flowing through resistance R in the circuit.

Then work done by the charge will be V*Q joules.

Since Electrical Power is defined as electrical work done per unit time. So in the differential form, we can write as

Hence the formula for Electrical Energy will be

Basically, the SI unit of the electrical energy is the joule (or watt-second).

If the current of 1 amp flows through the circuit across 1-volt potential difference up to 1 sec time then the electrical energy consumed by the circuit elements will be equal to the one joule (or 1 watt-sec).

But the commercial or practical unit of energy is Watt-hour, kilowatt-hour (kWh), Megawatt-hour (MWh), etc.

Usually, 1 kWh is known as 1 Unit of Electrical Energy.

kWh is also known as the Board of Trade (B.O.T) unit.

Biological systems are also using electrical energy. For example, hydrogen ions, electrons or metal ions may be more concentrated on the side of a membrane, setting up an electrical potential that can be used to transmit nerve impulses, move muscles.

Here are some specific examples of electrical energy.