Effect of Harmonic Components on EMF of Synchronous Generator The flux density distribution around the air gap in all well-designed alternators symmetrical with respect to the abscissa and also to polar axes.Thus it can be expressed with the help of a Fourier series which do not contain any even harmonics.

So flux density at an angle θ from the interpolar axis is given by,

The EMF generated in a conductor on the armature of a rotating machine is given by
ec = B.l.v

Substituting value of B,

Substituting in the expression for ec ,

Area of each fundamental pole,

This is because there are xP poles for the xth order harmonic.

Bm1 A1 = Φ1m = Maximum value of fundamental flux per pole

Similarly, the average value of xth harmonic flux per pole can be obtained as,

Substituting the values of flux in ec we get the expression for e.m.f. induced per conductor as

Hence the R.M.S. value of fundamental frequency EMF generated in a conductor is, 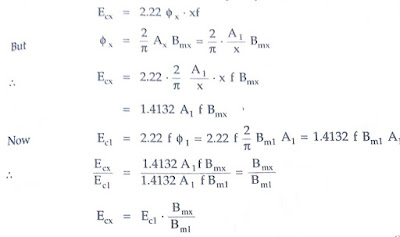 It can be observed that the magnitude of harmonic e.m.f.s is directly proportional to their corresponding flux densities.

The RMS value of resultant EMF of a conductor is,

Effect of Harmonic Components on Pitch Factor in Synchronous Generator:

α = Angle of the short pitch for fundamental flux wave then it changes for the various harmonic component of flux as,

Hence the pitch factor is expressed as,

x = Order of the harmonic component

Effect of Harmonic Components on Distribution Factor in Alternators:

Similar to the pitch factor, the distribution factor is also different for various halt components.

The general expression to obtain distribution factor is, 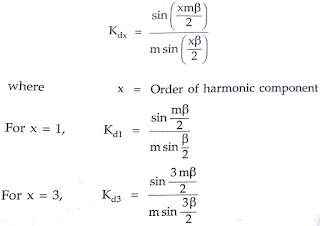 Total EMF Generated due to Harmonics in synchronous Generator:

Consider the windings to short pitch and distributed, the e.m.f. of a fundamental  frequency is given by,

While the phase e.m.f. of Xth order harmonic component of frequency is given by,

The total phase EMF is given by,

Line EMF: For star connected, the line or terminal induced EMF is √3 times the total phase EMF.But it should be noted that with star connection, the 3rd harmonic voltages do not appear across line terminals though present in phase voltage.

Key Point: In delta connection also, 3rd,9th,15th….. harmonic voltages do not appear at the line terminals.

From the ratio in above equation, we can write