Difference Between Generators And Alternators

The terms alternator and generator will sound the same to you if you are not a technical person. But, let me tell you, they are not. They are different machines despite the fact that both of them have the same function, to generate useful electricity.

If you want to know what an alternator and generator, how they work, and their differences then we have all of that in this post.

Before we begin, just understand that electricity and magnetism are both related. You can produce one with the help of the other one.

Both alternator and generator use these principles to generate electricity.

How An Alternator Works?

The alternator is also known as a synchronous generator. Whether it is a generator or an alternator, the fundamental principle to generate electricity remains the same. They both work on the principle of faraday’s law of electromagnetic induction.

The law states that a relative motion between the magnetic field and the conductor will generate the electricity in the conductor.

The same goes for the alternator as well, but unlike generators, it will only give out the AC electricity. The construction of an alternator is simple; the rotor contains the exciting winding, whereas the stator will have the armature winding.

The reason for the armature winding to be stationary is few. First, the voltage induced in alternators will be higher, so the insulation will be much easier compared to the rotating winding.

The excitation winding is powered by the DC, and it will be easier to connect the current through the brushes if the winding is on the rotor.

The alternator is a device that generates AC electricity from mechanical energy, and they only provide this energy when it is needed so the operation will be efficient.

How A Generator Works? 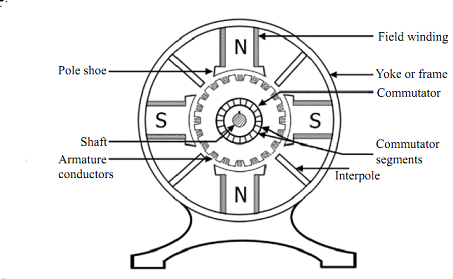 The electricity gets induced in the armature winding on the rotor. On the stator, for magnetic flux, it will either be the permanent magnets or windings are used. The armature winding will be rectangular, and both of its ends will terminate to the brushes.

The rotor inside the generator will rotate with the help of some external mechanical force, and the electricity will get induced in the windings. It will be taken out from the brushes.

The generators produce electricity continuously. It can also be used to recharge the completely drained batteries when they are completely drained, without any problems. Their ability to generate constant power makes them a strong choice as home backup solutions or to power the power tools at the job site.

DC And AC Electricity: What Is It? 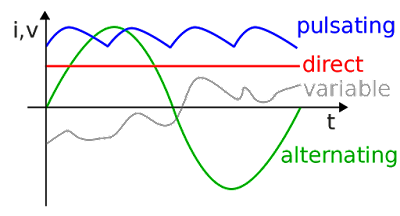 You may be knowing that the flow of electrons inside the conductor is referred to as the electric current.

For AC electricity, the flow of electrons will be back and forth, and this means the current is alternating in nature. This is the type of current most of the appliances in the house works on. But the voltage and the frequency of the electricity should be as per the standards.

This periodic change in the current direction is demonstrated in the form of the sine waveform, which is also known as the AC waveform.

The reason for this kind of power generator is because of the magnetic poles inside the generator and alternator. When one side of winding passes from under one of the poles, the electric current will be in one direction.

READ HERE  Losses In A DC Generator And DC Motor

When the same side comes under another pole, the direction of the current reverses, this keeps going on as the winding keeps rotating and the AC is generated.

The DC means the Direct Current. The DC is the one in which the flow of electrons will be only in one direction. And the magnitude of the current stays the same; it doesn’t change with time.

As there is no oscillation, we can say that the frequency of the DC is zero. The use of DC is mainly to power electronics due to its constant flow of electrons.

The generated current inside the alternator or the generator will always be AC, and you can’t generate DC from them. This AC for the generator is converted to DC with the use of either the brushes or the rectifier.

The process of conversion of AC to DC is known as rectification.

Key Differences Between The Generator And An Alternator

Both the generator and alternator have their own advantages and disadvantages.

The alternator has the stationary armature winding because –

Alternators are capable of generating electricity at the specified frequency.

Alternators can only supply the AC electricity while the generators can provide the AC as well as DC currents.

The alternators used in power stations are usually large and they accommodate large areas. On the other hand, the portable generators rated below 10Kw are not that large and won’t require that much space.

In alternators you can change the voltage output by adjusting field current which is achieved through an automatic voltage regulator. The latest inverter generator can regulate their speed to produce less power without sacrificing the desired frequency.

For an alternator, there is no need for a polarization. But, the generator will need to be polarized after it is installed.

That’s it. Most of the important things related to alternator and generator we have covered in this article. They look the same and have the same function to generate electricity. But they differ from each other in many things.

Their construction is different, one of them can supply the DC power and one of them can’t. These differences led them to be useful and suitable for different applications. You can’t use one instead of another.

TURBINE GOVERNING SYSTEM: WHAT IS IT AND HOW DOES IT WORK?