Hello friends, in this article we will study about the Deflecting Force in Indicating Electrical Instruments.

We have already studied about the “Indicating Instruments and various other Electrical Instruments“.

Essential forces or torque provided in the moving system of Electrical Instruments are:

We will deal with each forces one by one.

The deflecting force is the force required for moving the pointer from rest on the calibrated scale.

The current ( or voltage ) under measurement is utilized to produce the deflecting force. There are various effects of current which are utilized for producing deflecting force in the instrument.

Some important & popular effects of current are:

1. Magnetic Effect : When a current flows through the conductor, a magnetic field is produced in the wire.
This is called magnetic effect of current.

a)  Now if that current carrying conductor is kept in between the poles of permanent magnet, then there will be the force of attraction or repulsion between wire and magnet. If we made the wire in form of coil and placing it on the spindle as well as attaching a pointer to it, then it will give deflection on the scale on passage of current through the coil.This principle is used in Permanent Magnet Moving Coil (PMMC) Instruments.

c) If two soft iron pieces is placed near the coil, then there will be the force of repulsion between them. One iron piece is stationary while other is movable. Pointer is attached to the moving piece.This arrangement gives the Repulsion type Moving Iron Instrument.

2. Electrodynamic Effect- If two current carrying coil are taken, they will produce unlike pole near each other and thus there will be a force of attraction between them. One coil is fixed and other is free to move. Pointer is attached to the moving coil.
Such instruments are called Electrodynamic Instruments.

3. Thermal Effect- If the current to be measured is passed through the coil, then heat is produced in the wire. With the help of thermocouple (a transducer)  heat produced in the wire is converted into emf. The current produced by the emf is measured by an Ammeter. Hot wire instruments also uses the thermal effect for production of deflecting torque.

4.Electrostatic Effect- We know that force exists between two charged plates. One plate is fixed ,while other is movable and pointer is attached with the moving one.
Note that only Voltmeters can be made by using this effect. Such voltmeter are called Electrostatic Voltmeter. 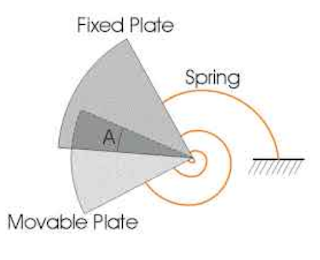 5. Induction Effect- If a disc is placed in between the poles of an electromagnet , an emf is induced and hence an Eddy current is produced in the disc.

As per Fleming’s left hand rule, force will be exerted on the disc due to the interaction of eddy current and magnetic field of electromagnet. It makes the disc to rotate. A pointer is attached to the disc . This effect is utilized in ac energymeter. Instruments using this effect cannot be used to measure dc quantities.

6. Chemical Effect- This effect is utilized in ampere hour meters, which measures the capacity of batteries.

What is Sag & Tension in transmission lines & Formula Calculation