What is Current Chopping?

While interrupting highly inductive current, like the no-load current of the transformer, the rapid deionization of contact space and blast effect may cause current interruption before its natural zero. Such an interruption of current before its natural zero is termed as “current chopping”.This phenomenon is more pronounced in case of air-blast circuit breakers which exerts the same deionizing force for all currents within its short-circuit capacity. Even though the instantaneous value of current being interrupted may be less than the normal current rating of the breaker, it is quite dangerous from the point of view of overvoltages which may result in the system. 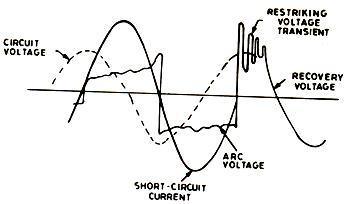 L = Inductance of the system

C = Capacitance of the system

i =Instantaneous value of arc current

According to the principle of energy conversion we have,

This theoretical value of V is called as “prospective Voltage or Arc Voltage”. If this voltage is very high when compared with the gap withstanding voltage, then the gap breakdowns and so “the arc restrikes. Again the current is chopped (interrupted) because of high quenching force and so, restriking occurs. This process repeats until the current is suppressed finally without any restrike and this occurs near current zero as shown in the figure.

In actual proactive, the voltage across the breaker does not reach dangerously high prospective values of voltage. It is due to the fact that as soon as the breaker voltage increases beyond the gap withstanding voltage, it breaks down and the arc restrikes due to which the voltage across breaker falls to a very low value of arc voltage which can also be seen in the figure. Hence, it can be said that the arc is not an undesirable phenomenon and instead it protects the power system from severe stress on insulation due to overvoltages. 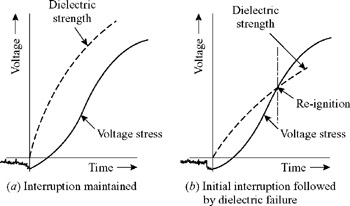 In order to reduce the phenomenon of current chopping, the overvoltages are to be reduced. This is possible by connecting voltage— grading (or non—linear) resistors across the circuit breaker contacts during arc interruption. In medium voltage systems, an RC surge absorber is connected across line and ground in between the inductive load and the circuit breaker. As a result, the RC combination absorbs the overvoltages.

What is Ground Fault and Earth Fault