Hello friends, welcome to ELECTRICAL ENCYCLOPEDIA.
In this article, we will study about the controlling torque in the Electrical Instrument. In the previous article we had studied about DEFLECTING TORQUE. You can read that article as link is provided below;

WHAT IS CONTROLLING TORQUE?

Controlling torque acts in the opposite direction to the deflecting torque.
Moreover, in the absence of controlling torque, the pointer once deflected, would not return to zero position on the removal of the current.

There are two methods of providing controlling torque in the instrument.

We will discuss each method one by one.

The arrangement in the spring control method is shown in this figure. 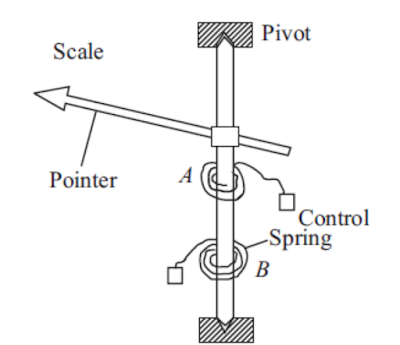 Both springs are wounded are in reverse direction to each other to compensate against temperature changes.

Materials used for making springs should be non magnetic, of low specific resistance and should have low temperature coefficient of resistance.

The controlling torque in this method depends upon the twisting of springs. The twisting force of spring is proportional to the angle through which the pointer moves.

Design of Springs: – Usually flat springs are used because they require less space.

The controlling torque developed by the spring is equal to

b = width of the spring.

t = thickness of the spring.

Ø = deflection of the pointer.

L = length of the spring.

1. The instrument can be placed in any position i.e., horizontal as well as vertical.

2. This method does not increase the weight of the instrument as springs are light.

3. Scale is uniform in this method.

a. Temperature variations can affect the length and design of the spring and hence also changes the controlling torque.

b. Springs get deterioted with the time and hence its accuracy is also lost.

In this method, natural downward pull due to gravity is employed. A small weight “W” is placed on the arm attached to the moving system.

At the zero position of the pointer, the control weight W is in the vertical position and therefore no controlling torque is produced. However, under the action of the deflecting force, the pointer deflects by an angle “Ø” from its zero position.
As shown in the figure below, as pointer moves weight will also move. 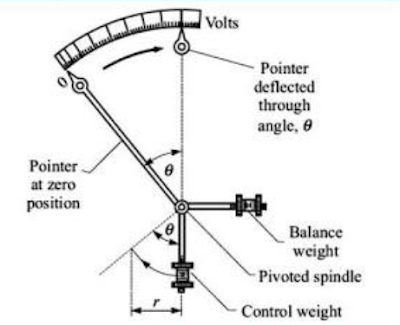 Only the component WsinØ will provide the necessary controlling torque and helps to retain the original position.

It is seen from above equation that controlling torque is directly proportional to the sine of the deflected angle.

1. It is simple and cheap method.

2. Not affected by temperature variations.

2. It increases the weight of the system.

3. The instrument should be placed in the always in the vertical position and thus their use is limited to the indoors, otherwise it may produce error in the reading.

[PDF] Handbook of Analytical Techniques in Concrete Sciences and Technology By...