In this article, we are going to discuss what are the disadvantages and adverse effects of low power factor in Electrical system? Also, we will discuss the main causes of poor power factor.

But before that, we have to understand the basic concepts of Power factor and its importance in our electrical system. I have already discussed it in previous article concepts and importance of power factor.

Power factor plays an important role in AC circuit since optimum utilization and consumption power depends mainly on power factor. We all know that Power and current for single-phase and three-phase AC circuits are calculated as: 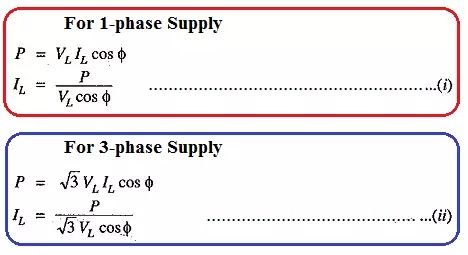 It is clear from both the equations (1) and (2) that for a constant power and supply voltage, Current (I) is inversely proportional to CosФ i.e power factor. So in other words, we can say that when power factor increases, current decreases and vice-versa.

Hence in case of low power factor, the load current will increase. This high load current causes the following disadvantages in Electrical system.

These are the main disadvantages of Low Power Factor in our electrical system.

Let’s discuss all these disadvantages in detail:

We all know that most of the Electrical Machineries (Transformers, Alternators, Switchgears, etc) are rated in kVA. But, it is clear from the below formula that Power factor is inversely proportional to the kVA rating of electrical machines.
i.e.  kVA = kW/ CosФ


Therefore, for low Power factor, larger will be kVA rating of Machines. Hence large kVA rating of electrical equipment makes them costly and heavier in size.

At low power factor, for transmitting a fixed amount of power at a constant voltage the conductor will have to carry more current. As the current carrying capacity of the conductor is directly proportional to the cross-sectional area of the conductor. So to transmit high current, greater conductor size transmission lines are needed.

Here from the above example, it is clear that if a motor works at a poor power factor of 0.8 then it draws more line current than at unity power factor. Hence we required greater conductor size at low power factor. This increases the cost of the conductor as well as transmission line.

Since low power factor causes large line current to drown by the electrical equipment. So large current at low lagging power factor causes a higher voltage drop in alternators, transformers, transmission lines, etc. This results in the decreased voltage available at the supply end of equipment and hence poor voltage regulation. So in order to keep receiving end voltage in the permissible limit, we need to install extra regulation equipment (Voltage regulator).

Electrical Power Supply Company imposes a penalty to the consumer in electricity bill for maintaining low power factor (below 0.9).

Following are the main Causes of Low power factor.

What is Back-to-Back Test (Sumpner’s Test) on Transformer?